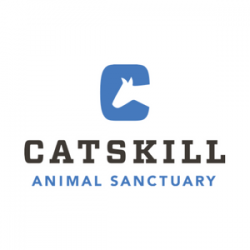 Catskill Animal Sanctuary opened in January of 2001, the culmination of many months' research, travel, and internships at successful farm sanctuaries by founders Kathy Stevens and Jesse Moore.

Dino, the survivor of a Brooklyn arson that killed 23 horses, was the first resident at the small Kerhonkson, NY farm. In 2003, the Sanctuary moved to an 85-acre property in Saugerties, NY, and in early 2010, we completed that location's conversion to solar energy. In 2011, an additional 32 acres was acquired. CAS at 32, just five minutes away from the Old Stage Road location. Today it is the home for many animals and is the future location of a new visitor's center.

In addition to direct animal aid, the Sanctuary offers a wide variety of programs and events (including on-site tours) designed to help people experience farm animals as the unique individuals they truly are, and to educate people about the institutionalized suffering of food animals on factory farms.

Founder Kathy Stevens speaks at community organizations, schools, and conferences each year, and has written two books full of stories about animals that have lived at the Sanctuary. Her first book, Where the Blind Horse Sings: Love and Healing at an Animal Sanctuary, was released in 2007, and her second book, Animal Camp: Lessons Learned from Rescued Farm Animals, was released in 2010.

Catskill Animal Sanctuary has provided a safe haven for over 4,000 farmed animals and has found loving homes for many of them.