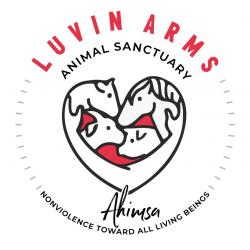 Luvin Arms is a 501(c)3 nonprofit animal sanctuary for abused or neglected farmed animals in Erie, Colorado. Our rescued residents include cows, pigs, turkeys, chickens, horses, goats, sheep, and ducks. These beautiful residents were rescued from horrific situations including abuse and neglect cases, factory farms, religious rituals, slaughterhouse-bound trucks, bankrupt farms, and more. They were left with nowhere to turn and would have been slaughtered if they hadn’t been saved.

Ahimsa – Nonviolence Toward All Living Beings

We are working to provide exceptional lifelong social, emotional, and cognitive care to rescued farmed animals, and to advocate for those who have not been rescued by sharing our residents’ stories to inspire, educate, and empower others to embrace a more compassionate and sustainable lifestyle.

Our vision is to create a sanctuary of inspiration and connection where people are empowered to create change that leads to more compassionate choices for themselves, for the planet and justice for all beings.

Luvin Arms opened its doors in August 2015 after founders Shaleen and Shilpi realized farmed animals were in need of refuge. The Shahs began their journey toward providing a safe haven for rescued farmed animals with a horse named Jale, (pronounced Haalee) who came from a situation of neglect. After saving Jale, they received a call about a pregnant mare at an auction. When the Shahs visited the auction, they discovered there were not only horses there, but a variety of suffering farmed animals who also needed help. This inspired the Shahs to start a sanctuary for farmed animals. As more animals came to call Luvin Arms home, more hands were required for the work involved in caring for them. Since the beginning, passionate community members have volunteered their time and talents to continue to help Luvin Arms and its residents thrive.