What is a Vegan Professional, Anyway? 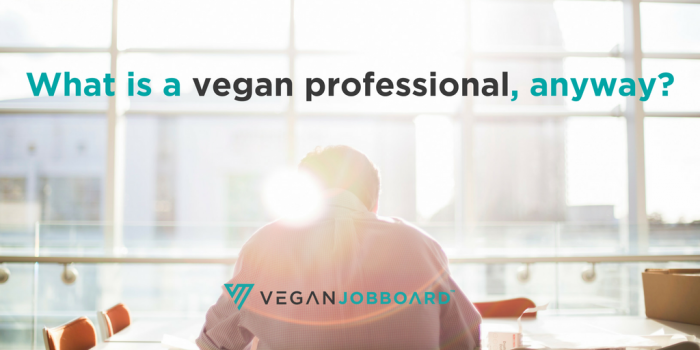 When most people think of vegan professionals, chefs or clothing designers – or even lifestyle coaches – might come to mind. But at Vegan we believe that the term “vegan professional” necessarily encompasses a much broader definition.

Have you ever thought of hiring a vegan accountant? What about a vegan investment advisor? Or a vegan graphic designer?

Now it’s true that crunching numbers doesn’t have a lot to do, directly, with crunching carrots. However, if someone defines themselves as a vegan professional – regardless of their profession – they are making a statement about their ethics, and the way they conduct themselves in life and in business. They are making a stand against cruelty, and for compassion and a sustainable future. When you support a vegan professional as a customer, you are making a statement about the kind of world you want to live in and help build. If you make the effort to seek out a vegan carpenter when you need work done to your house, for example, you know the money you are paying to the carpenter is helping to support the lifestyle of someone who has identified a similar ethical standard to you. You know the dollars you are paying him/her will likely be spent on products that also help to make the world a better place. This is how we build a strong vegan economy.

Vegan Professionals are needed to help make a powerful change

And that’s why we believe so strongly Vegan Mainstream that vegan professionals are needed in ALL of the business world. Successful business people are a powerful conduit for change. Does this mean that as a vegan professional you can ONLY do business with other vegans? No. In fact, it’s important that we DO work outside the vegan hub for several reasons. First, the vegan world, though growing, is simply not big or diverse enough yet to make that realistic. Second, if we stay in our sheltered bubbles, not dealing with anyone who is not vegan, we limit our ability to change minds, hearts lives. Compassionate sharing of vegan ideals is key to helping the movement to grow. Proving to the rest of the world that vegan professionals are capable and and that our products/services are viable and valuable will help make veganism more mainstream, and give the movement the credibility it deserves. So, what kind of vegan professional are YOU?